What are Digital Video Connectors?

Digital Video connectors are used to deliver the highest quality video signal. The technology uses TMDS (Transition Minimized Differential Signaling) to transmit large amounts of digital data from the source to the display, resulting in a high-quality image. DVI (Digital Visual Interface) was developed by the industry body DDWG (the Data Display Working Group) to send digital information from a computer to a digital display, such as a flat-panel LCD monitor. HDMI took a step forward by integrating audio and video into a more compact interface. DisplayPort is an interface technology that is designed to connect high-graphics capable PCs and displays as well as home theater equipment and displays. DisplayPort is similar to HDMI in that the DisplayPort signal carries both digital audio and video.

Select the digital video connector that you want to learn more about:: 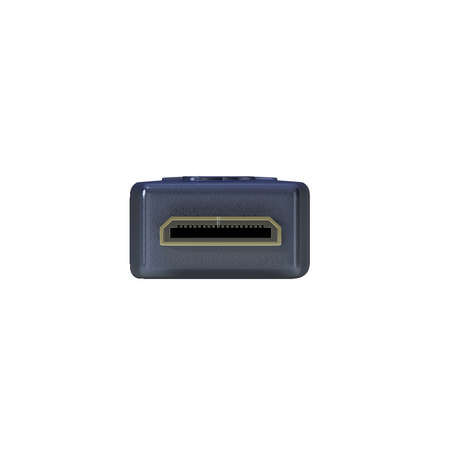 HDMI stands for High Definition Multimedia Interface. This technology carries the same video information as DVI but adds the capacity for digital audio and control signals as well. The current version of HDMI carries one TMDS link of digital video. Found on many home theater/consumer electronics devices, HDMI uses a 19-pin connector that is held in place by friction. This connector is technically described as a Type A HDMI connector.

The HDMI Mini connector is a Type-C HDMI connector measuring 10.42 mm x 2.42 mm. This mini connector has the same 19-pin configuration as the standard HDMI A connector and is intended for use with portable electronic devices. Using an adapter, this connector can be used with a standard HDMI cable.

This connector contains 24 pins, arranged in three horizontal rows of eight pins. To the side of this grouping of 24 pins is a wide, flat pin called a ground bar. A dual-link interface provides two TMDS links, or groups of data "channels" that can carry more than 10 Gbps of digital video information. A dual-link cable is backwards-compatible with single-link applications. The majority of DVI applications will use this DVI-D dual-link cable connection.

A single-link DVI connector has 18 pins. The male plug has them arranged in two groups of nine pins, with the flat ground bar off to one side. A single-link interface provides one TMDS link. This type of cabling is ideal for use with DVI to HDMI adapters.

This connector appears almost identical to the dual-link DVI-D connector except that it has an additional four pins that surround the flat offset ground bar. This is because the DVI-I interface was designed to carry both digital and analog signals. However, most DVI displays and video sources are DVI-D, and the female ports do not contain sockets to accept the four extra analog pins. As a result, DVI-I cables are limited to a narrow range of applications such as certain KVM switches. Also note that the offset ground bar on a DVI-I plug is larger than the one on a DVI-D plug. This means that a DVI-I connector cannot fit into a DVI-D socket simply by removing the four analog pins.

A single-link DVI-I connector has 18 pins. The male plug has them arranged in two groups of nine pins, with the 4 pins surrounding the flat ground bar off to one side. A single-link interface provides one TMDS link.

DisplayPort is an interface technology that is designed to connect high-end graphics capable PCs and displays as well as home theater equipment and displays. Like HDMI and DVI, DisplayPort utilizes TMDS (Transition Minimized Differential Signaling) link technology to send high bandwidth video and audio signals. The 20-pin connector allows the contact point to send maximum data transfer rates of 8.64 Gbps plus 1 Mbps for its AUX channel which can carry additional data.