VDI vs. RDS: What Is the Difference between VDI and RDP

RDS and Their Advantages 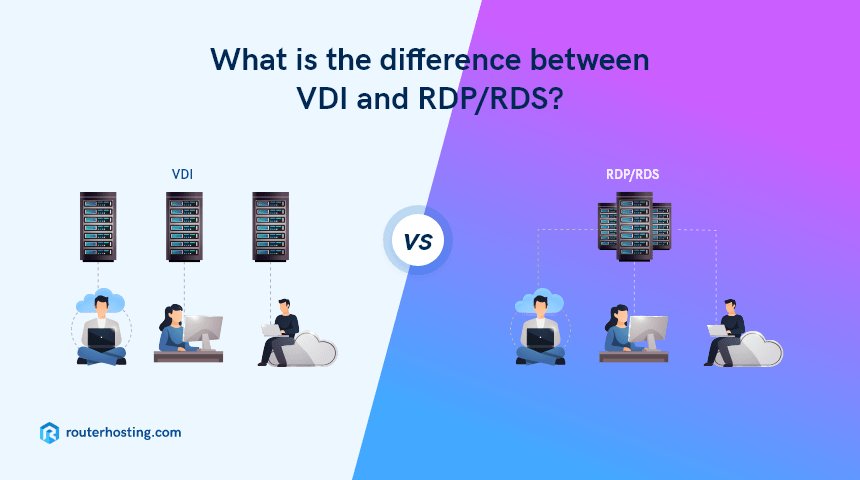 Remote Desktop Services (RDS) or Virtual Desktop Infrastructure (VDI) are both solutions to achieve desktop virtualization. They have their differences and similarities, strengths, and limitations.

With current remote access requirements, thousands of companies are looking at ways to allow their employees to operate remotely. Most of them choose between Remote Desktop Services (RDS) or Virtual Desktop Infrastructure (VDI) services.

There are many differences between the two methods.

Moreover, there are concerns about the price and complexity of virtual desktop infrastructure environments, not to mention the network’s actual performance. If users can’t easily navigate their virtual desktops, it doesn’t matter how much it costs to implement and maintain.

Microsoft’s Remote Desktop Protocol (RDP) is more than twenty years old, but even frequent users still have a vague grasp of the concept and its implementations. The distinction between a VDI and an RDS desktop may be minimal for users, but it is incredibly necessary for IT people to determine how to host certain virtual desktops.

What is Desktop Virtualization

What Is VDI And How Does It Work?

What Are the Advantages of VDI?

What is Remote Desktop Protocol (RDP)?

What is RDS? And How Does It Work?

What Are the Advantages of RDS?

What Is the Difference between VDI and RDS?

VDI vs. RDS: Comparison of Costs

What is Desktop Virtualization

Desktop virtualization enables users to replicate a load of workstations to navigate a desktop from a connected computer, locally or remotely. This separates the desktop environment and its software from the physical client interface used for accessing it.

Traditionally, individuals and companies purchase physical machines (desktop towers, servers, or laptops) to do their jobs. A physical computer is used for all users to send and receive emails, create reports, spreadsheets, etc.

Businesses may also have central physical servers that would host their company file system, email exchange, and backup services. These are all physical machines used for one or more purposes.

Desktop virtualization is a core feature of digital workspaces that relies on the virtualization of applications. Virtual computers and servers are all hosted on the same computer hardware, but each have their own operating system (OS) and software installed to do their intended work or function.

“Remote desktop virtualization” is another application of virtualization. It is mostly used in a client/server computing environment. This model helps users to run operating systems and programs from a server inside a datacenter while all user interactions take place on a client computer.

This client computer may be a laptop, a “thin client” computer, or a smartphone. As a result, IT divisions have more unified control over software and desktops and can optimize the investments in IT hardware by remote access to shared computing resources.

What Is VDI And How Does It Work?

Simply put, VDI is a combination of hardware, software, and network configuration that allows virtual desktops and virtual servers to be distributed to end-users. They can reach their virtual machine from anywhere on the network.

With VDI, users can run a full desktop operating system on a dedicated virtual machine (VM) hosted on a physical server. Each VM will be allocated dedicated resources to boost the efficiency and protection of the connection. Several instances of VMs can co-exist on the same server or on a virtual server that is a cluster of multiple servers.

VDI VMs could be “persistent” or “non-persistent”. Persistent desktops can be configured for different users with unique apps and user profile info, and users can install their own apps if they have administrative rights. On the other hand, on non-persistent desktops, users are randomly allocated a VM from a current pool of VMs.

This model’s standard deployment is within an extensive private network, e.g. a large organization’s or a hospital’s, where many people can access their desktop interface by signing in to a device within a private computer network.

VDI ensures a smooth user experience across multiple devices and improves productivity. This approach has worked well and will continue to work well for many years. VMWare and Citrix are the industry leaders in this field.

It is worth noting that the VDI structure is not straightforward; it is rather tricky to set up. Usually, highly skilled IT experts are needed for its deployment and maintenance. It is often known to be expensive in that aspect.

What Are the Advantages of VDI?

What is Remote Desktop Protocol (RDP)?

RDP (Remote Desktop Protocol) is a network communication protocol developed by Microsoft that enables network administrators and users to interact with another device remotely. It is an extension of the T.120 protocols, which are the ITU (International Telecommunications Union) standards.

Microsoft has developed the Remote Desktop Protocol (RDP) to help identify and repair bugs, or to handle several servers around a large site or an extensive network in diverse locations. Using RDP server, the end-user could log in to even more advanced engines from long distances, and multiple users could do this from various places. Many Windows operating systems provide RDP features.

What is RDS? And How Does It Work?

RDS (Remote Desktop Services) is an IT concept for Microsoft Windows server features that enable users to remotely access a Virtual Machine (VM) or an operating system through a graphic user interface. IT administrators generate a desktop image on the server, which is then displayed to the user with all the programs and data associated with their user credentials.

The client device needs the RDS client, and the RDS server needs the Windows Server operating system to connect remotely to one or more terminal servers. (Previously, RDS was called “Terminal Server.”) All operations take place server-side, not on a user machine.

In RDS, users share the host’s operating environment, programs, and hardware resources. Applications and data are unified, making it easy to monitor, install, customize, and upgrade for end-users.

The best advantage of this is that your infrastructure resources will be shared. RDS can be used to provide access to both full desktops and single applications. RemoteApp is a subset of Microsoft RDS that gives the end-user the idea that they only have access to a single, disconnected application, such as Microsoft Excel, without the operating system behind it.

RemoteApp is only accessible on Windows Server 2008R2. Technically speaking, RDS technology can also be used to connect to VDI-based desktops. This means that you can connect via RDP to a VDI, or via RDP to the VDI via the RDS platform.

With RDS, desktop and device customizations are restricted since all users have access to the same operating system and software during their desktop sessions. Besides, sharing the hardware and software resources of the server will lead to contention and performance problems. Some programs are not configured for multi-user session-based access.

What Are the Advantages of RDS?

What Is the Difference between VDI and RDS?

Most IT experts believe that RDS-based implementations perform incredibly well with a vast number of corporate use cases. RDS-based access also has the essential advantage of being far more cost-effective and easier to handle.

VDI is built on Windows 10, Windows Client Operating System. RDS is built on the Windows Server operating system. All users log in to the same server interface by using RDS. While certain configurations are adjustable, they will all have the same user experience.

Each computer functions independently of the others, which may be necessary for highly supervised or protected environments. Users would not experience the typical Windows 10 or 7 interfaces, but rather a desktop-like Windows server.

By using VDI, all users have a dedicated platform that they can modify. The administrator can determine policies to decide what can be changed and what is common among various virtual systems. Users would have a more familiar Microsoft Windows 10 environment.

In general, RDS is best suited to organizations with multiple users needing the same number of apps and services. RDS is simpler to implement and manage than VDI, though lacking a bit in customization. Multiple users sharing server resources minimizes capacity and overhead expenses but contributes to application problems. VDI is a safer choice for more complex implementations of multiple user forms and provides virtual desktops and software independently to prevent compatibility problems. However, attention must be given to the high cost and difficulty of implementation and maintenance.

VDI vs. RDS: Comparison of Costs

A VDI system is typically the costliest since there is an extra layer of software needed to manage a VDI system. This makes RDS the better cost-effective alternative.

They’re both a bit costlier than most other options, and you’re going to need to invest in infrastructure. VDI is more suitable for remote workers, businesses with more robust resource and processing requirements, and workers in closely controlled or vulnerable environments.

VDI and RDS have features that answer a company’s various needs, but it may not be easy to pick one. They will help companies thrive by allowing central management, adhering to legislation, and growing infrastructure consistency.

The right approach is focusing on the needs, finances, and other business criteria of each company. VDI is ideal for the wider workforce. RDS is easy and cost-effective. Before settling on one platform, consider your budget, the intent of remote work, the nature of work involved, and the learning curve for you and your remote teams.