What Is USB-C? An Explainer

With so many Macs and Windows laptops now featuring the interface, it's clear that the USB Type-C connector is here to stay. Here's why that's a good thing—and how to understand both its subtleties and where it's headed. 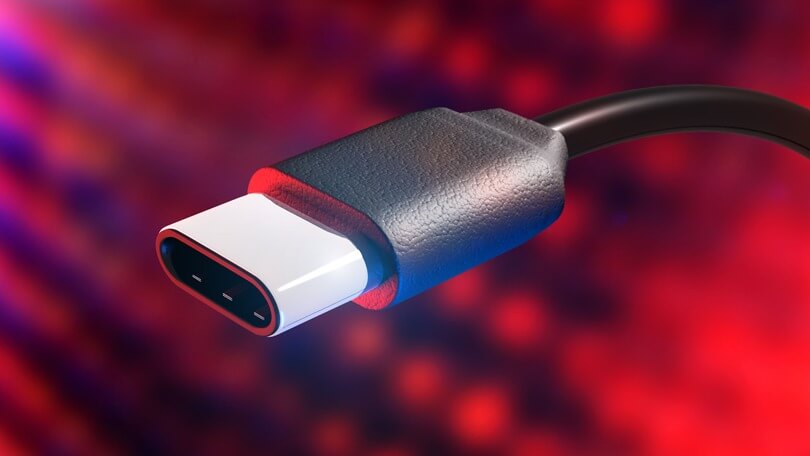 Landing on a single standard to rule them all is an elusive aim in the realm of personal technology. At best, you end up in a format war, and one faction emerges victorious for a few years until an entirely new technology takes it out. VHS ate Betamax, then was ousted by DVD, which faded in the face of Blu-ray (a standard that itself knocked off its chief rival, HD DVD), now facing its own mortality at the hands of online streaming services.

But USB-C is different—and perhaps it's even as truly universal as its acronym (Universal Serial Bus) suggests. USB Type-C ports are now found on all manner of devices, from simple external hard drives to high-end laptops and the latest smartphones. While every USB-C port looks the same, not every one offers the same capabilities. USB-C may now be ubiquitous, but it doesn't serve the same functions everywhere. Not by a long shot.

Here's a guide to everything USB-C can do, and which of its features you should look for when buying your next USB-C device.

USB-C is an industry-standard connector for transmitting both data and power on a single cable. The USB-C connector was developed by the USB Implementers Forum (USB-IF), the group of companies that has developed, certified, and shepherded the USB standard over the years. The USB-IF counts more than 700 companies in its membership, among them Apple, Dell, HP, Intel, Microsoft, and Samsung.

This broad acceptance by the big dogs is important, because it's part of why USB-C has been so readily accepted by PC manufacturers. Contrast this with the earlier Apple-promoted (and developed) Lightning and MagSafe connectors, which had limited acceptance beyond Apple products, and became obsolete thanks in no small part to USB-C.

The USB-C connector looks similar to a micro USB connector at first glance, though it's more oval in shape and slightly thicker to accommodate its best feature: flippability.

Like Lightning and MagSafe, the USB-C connector has no up or down orientation. Line up the connector properly, and you never have to flip it over to plug it in; the "right way" is always up. The standard cables also have the same connector on both ends, so you don't have to figure out which end goes where. That has not been the case with all the USB cables we've been using for the past 20 years. Most of the time, you have different connectors at each end.

USB-C and USB 3.2: The Numbers Beneath the Port

Where USB-C gets tricky is in the numbers that get attached to the ports. The most common speed that USB-C connectors are rated for is 10Gbps. (That 10Gbps is theoretically twice as fast as original USB 3.0.) USB-C ports that support this peak speed are called "USB 3.2 Gen 1x2."

The minor wrinkle is that USB ports with 10Gbps speeds can also exist in the original, larger shape (the USB Type-A rectangles we all know), and are dubbed "USB 3.2 Gen 2x1." With the exception of some desktops, though, it's more common to see 10Gbps-speed USB ports with Type-C physical connectors. Note: Some older USB-C ports support just 5Gbps maximum speeds, so it's important to look for a "USB 3.2 Gen 1x2" or "10Gbps" designation to verify that a given USB-C port supports 10Gbps transfers. That said, all of these ports are backward-compatible, just at the speed of the slowest element.

Confused yet? Further complicating matters: The number scheme around USB 3 has been in flux since 2019, which has made references to these ports something of a swamp. Until last year, many USB-C ports carried the USB 3.1 label ("USB 3.2" was not yet a thing) in Gen 1 and Gen 2 flavors, and some spec sheets continue to reference the older name, along with SuperSpeed branding. In a confusing twist, the USB-IF decided to eliminate the use of "USB 3.1" in favor of these various flavors of USB 3.2, as outlined below in this handy decoder chart...

The USB 3.2, USB 3.1, and SuperSpeed designations you see above on each line are equivalent, just differing in name. If you see a USB 3.1 label, it's best to inquire about the maximum transfer speeds of the port directly with the device manufacturer or reseller.

As you can see above, some USB-C ports use the USB 3.2 Gen 2x2 specification, with maximum speeds of 20GBps. The USB-IF decided on "2x2" because this standard doubles the data lanes within a USB-C cable to achieve the 20Gbps transfer speed. These ports have not been widely available, though PC builders and upgraders can find them on some high-end desktop motherboards. They will likely go by the wayside as 2021 progresses, in favor of another emerging flavor of USB-C ports, supporting USB4 (more about which in a moment).

Underlying Support: The Many Roles of USB-C

You might think of your old USB Type-A port simply as a data port for connecting drives or peripherals like mice. But USB-C, depending on the specific port's implementation, can do much more. One of USB-C's most useful skills, when designed thus, is delivering enough power to charge the host device, such as laptop or smartphone. In fact, many lightweight laptops that have USB-C ports use them in place of a traditional barrel-style connector as the only option for attaching an AC adapter.

USB-C's support for sending simultaneous video signals and power means that you might be able to connect to and power a native DisplayPort, MHL, or HDMI device, or connect to almost anything else, assuming you have the proper adapter and cables. (See below for more on adapters.) The USB-C spec even factors in audio transmissions over the interface, but so far it has not replaced the 3.5mm headphone jack on computers to the same degree as it has on phones and tablets.

Make sure to check the specs on any PC you're thinking of buying, because not all USB-C ports are alike. So far, every one we've seen supports both data transfers and connected-device power delivery over USB-C (though not necessarily charging of the host device). But while the USB-C standard supports connecting DisplayPort and/or HDMI displays with an adapter (via the DisplayPort-over-USB protocol), not every PC maker has connected the ports to every system's graphics hardware. Some USB-C ports on a system may support video-out connectivity, while others may not; or none may. Looking at the details is important.

Thunderbolt 3 and 4: Layering Even More Speed on USB-C

Perhaps the most useful protocol that a USB-C port can support is Thunderbolt 3, or the emerging Thunderbolt 4. Either one adds support for up to 40Gbps of throughput, alongside reduced power consumption and the ability to move as much as 100 watts of power over the interface.

A USB-C port with support for Thunderbolt 3 or 4 means that a single cable is all you need to push power and transfer a large amount of information (up to and including video data for two 60Hz 4K displays) to and from even a complex device like a computer, something many laptop manufacturers have been quick to take advantage of. Some models of Apple's MacBook Pro boast four Thunderbolt 3 connectors, which is as many as we've seen to date, and it gives you more expansion potential than you ever had with earlier versions of USB. 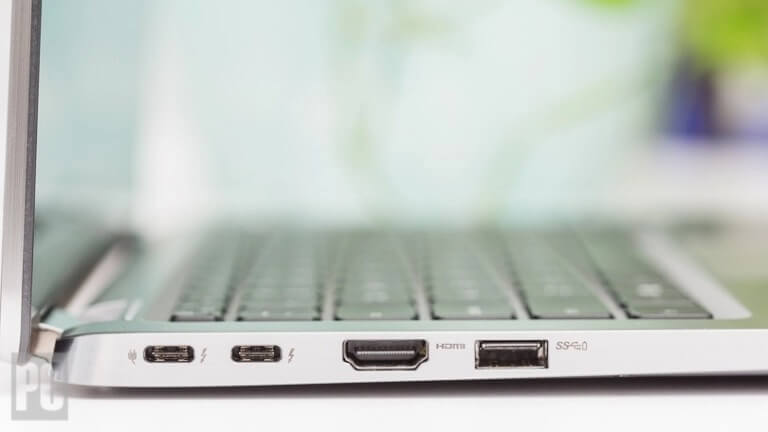 Now, like with DisplayPort over USB-C, not every USB-C port you see necessarily has Thunderbolt 3 or 4 support. Check a device's spec sheet or documentation for the Thunderbolt details to be sure. Some devices may have more than one USB-C port, with only some supporting a Thunderbolt spec.

That Thunderbolt uncertainty will change with the USB4 standard. USB4 ports, which have just started showing up on scattered laptops here in early 2021, support Thunderbolt 3 speeds by default, while remaining backward-compatible with USB 3. They make use of the same physical connector shape of USB-C.

USB-C is electrically compatible with older USB 3.0 ports. But because of the new shape of port, adapters or cables with appropriate plugs are indeed required if you want to connect anything that doesn't have the USB-C oval shape.

Sometimes a new laptop will come with these; in other cases, you may have to purchase them separately. Apple, for instance, sells a variety of USB cables and adapters for connecting USB-C to other technologies such as Lightning or Ethernet. You can also find a variety of these for PCs if you browse online retailers. Some even support older or more esoteric protocols, to ensure a device you have from years ago will work on today's hardware. It's easy to find USB-C-to-DVI adapters, for example, but we've also come across some that split to two RS-232 serial connections.

The good news, though, is that if you invest in a couple of normal USB-C cables, they will work with anything and everything that supports USB-C, regardless of generation. Note, however, that that does not extend to Thunderbolt. Though Thunderbolt 3 and 4 use a USB-C physical connector, you'll need an appropriate Thunderbolt-specific cable to guarantee compatibility and full speed. This cable will have a USB-C connector at both ends but with a lightning symbol on each. It'll also be significantly pricier than a standard USB-C. Again, see our Thunderbolt 4 primer for more on the cable issues.

Plus, newer docks for PCs and docks for Macs have now widely integrated USB-C. Having only one USB-C port is not a problem: You can find USB-C docking solutions available, both from PC manufacturers like Dell and HP, and from third-party accessory makers like Belkin and OWC. These docks can recharge your laptop, give you access to extra ports (including Ethernet, HDMI, USB 3.0, and VGA), and add support for multiple monitors.

Do You Need USB-C?

The presence (or absence) of a USB-C port is increasingly becoming a consideration when buying a PC. If you buy an ultrathin laptop, it will almost certainly have at least one USB-C port, which will catapult you into the ecosystem automatically. If you're more of a lover of desktops, you're certain to find the ports there, too, with at least one on the motherboard-side I/O panel and likely more on high-end and gaming desktops. Some desktops and aftermarket PC cases are putting one on the front panel, too. (Desktop DIY types should know, though, that a USB-C port on a PC case's front or top will require a specific USB-C header connector at the motherboard end, and only late-model motherboards will have these.)

Even if you don't need USB-C now, you will before long. We're only scratching the surface of what USB-C can do, but one thing is certain: The next generation of cross-platform connectors is quickly replacing the old guard just as the original USB standard replaced Apple Desktop Bus (ADB), FireWire, parallel, PS/2, SCSI, and serial ports on Macs and PCs. USB-C truly is one port to rule them all.